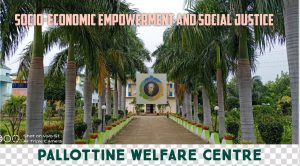 Pallottine Welfare Centre is a non-profit charitable organisation which challenges the social and economic inequalities in our society and seeks to empower the vulnerable categories of people in order to make them independent to help themselves.  Pallottine Welfare Centre began with the aim to correct, minimise and remedy the socio-economic conditions of injustice in our society.

The Vision and Mission of the Centre is to fashion, with the involvement of people themselves, just and fair socio-economic conditions of life in our society that every individual person and every group can have good standard of living worthy of his/her human dignity as well as stand with everyone else in equal dignity and human status before the law and in the society.  For this purpose the Welfare Centre gives special attention to the disadvantaged and vulnerable sections of the society seeking to empower them so that they can stand up on their own as equal citizens of our country and ask from powers that be for what is rightfully theirs. 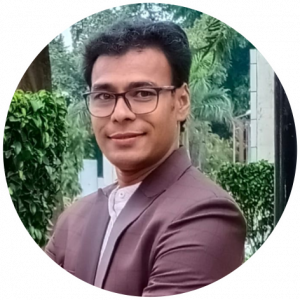 The Pallottine Welfare Centre was established in the year 2012 by the initiative of Very Rev. Fr. Shanti Prakash Panna, the former Provincial Rector of Khrist Jyoti Province, Raipur.  The Provincial Rector is also the ex officio president of the Registered Society.  Rev. Fr. Rashmikant Nayak was the first Director of the Pallottine Welfare Centre as well as its Secretary.

In keeping with its vision and mission the Pallottine Welfare Centre intends to render charitable services to the needy and the disadvantaged involving itself in socio-economic activities, like, supporting children homes, running Db Tech and Coaching Centres, adopting children for education, extending educational sponsorship programmes, etc. The Centre has reached out to three states, viz., Chattisgath, Odisha and Jharkhand, by way of social and charitable works.

Pallottine Welfare Centre seeks also to engage vulnerable “at risk” children through in-school leadership programmes and after-school academics (skill building) that would help these children build up their confidence and self-esteem as well as with income generation skills.  The Centre has also the goal of creation of sustainable and self-reliant rural communities. 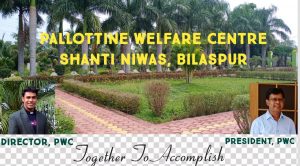 In 2020, as the nation reeled under the weight of the Covid-19 pandemic, which threatened the lives of millions and brought the entire nation to a standstill, the Pallottine Welfare Centre proved itself as an outstanding source of service and support to migrant workers, construction labourers, rickshaw pullers, daily beggars, etc.  It served cooked food for 8260 migrant workers in Bilaspur and provided substantial amount of dry ration to 650 families in the same city and its neighbourhood. 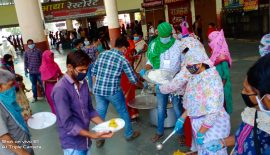 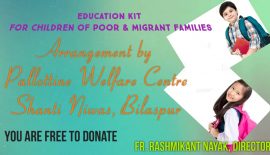 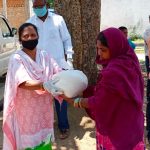 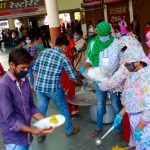 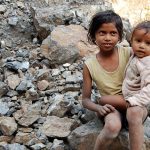 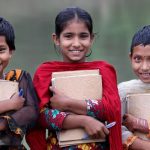 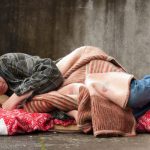 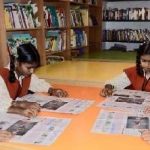